What is there to do in Dakar?

This week was all about Dakar. A lot of my outings so far have taken me to the outskirts or outside of the city, but there’s so much to do right here! It’s always fun to get out and about, explore different regions, see new places, but I think a lot of times people forget to enjoy where they are, and really get to know where they’re living. 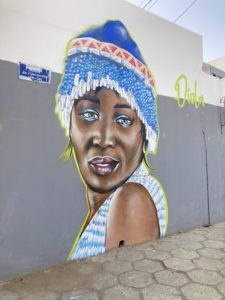 I’ve seen a lot of my neighborhood when I’m running, but I never have my phone with me to take pictures.  So one afternoon this week I went out for a long walk, retracing one of my usual running routes. The nice thing about walking (compared to running) is that you have more time and energy to really look around you. You see things that would otherwise just be a blur. I noticed, for example, that Dakar is a city of murals. Every other block it seems there is some sort of painting, graffiti, or artsy public service announcement covering what would otherwise be an ordinary concrete wall. My favorite is a series of murals on the boulevard that goes through the University, each with a person representing a different Senegalese ethnicity. In addition to murals, there are of course no end to the fruit and nut stands, sheep (in preparation for the upcoming Muslim holiday Tabaski, as it’s called in Wolof, or Eid al-Adha), and colorful “transport commun” buses, all creating a bright and bustling atmosphere. 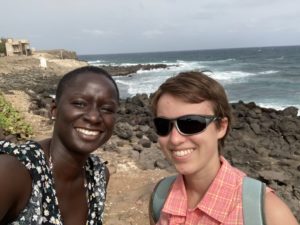 The windy ocean side of Ile de Ngor

On Sunday, I continued my exploration of local attractions with a visit to Ile de Ngor, a small fishing community of the north coast of Dakar. I went with my host mom, Marie Hélène, and we spent the morning walking around the island and enjoying the beach. In the afternoon, we went to the movies with the two youngest kids in the family, Louis Jacques and Mavet. It was their first time at a movie theater! We saw Pierre Lapin 2 (otherwise known as Peter Rabbit 2), and although I might have taken a nap in the middle, the beginning and end were quite fun. After the movie we visited an art exposition featuring the history of film in Senegal, with a spotlight on Ousmane Sembene. 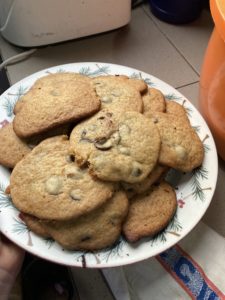 When we returned home in the late afternoon, it was baking time! Chocolate chip cookies, that is. I brought my favorite Ghirardelli chocolate chips with me, assuming I could find everything else here in Dakar. The only ingredient I couldn’t find was brown sugar, so I substituted with a combination of white sugar and honey. As it turns out, I might adopt that adjustment at home, because the taste and texture were amazing! The cookies were a big hit, and of the three dozen or so that came out of the oven, I think there were only a couple left in the morning.

I’ve really enjoyed seeing all that Dakar has to offer, but I think my favorite times are when I’m at the house with my host family, doing things like baking cookies, talking about our days, playing with the puppies. After all, what’s not to love about cookies and puppies?