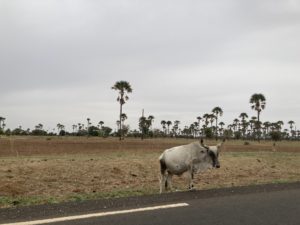 This week marks the halfway point of my time in Senegal – already?? I’m starting to miss home a little bit, but it’s currently over 100 degrees F in my hometown of Tacoma, and the city of St. Paul where I go to school is covered in mayflies…so I’m happy to be in Dakar. Each week brings new adventures, and I can’t wait to see what the next four weeks bring!

This weekend, I left the city for the first time for an overnight trip to the Sine Saloum river delta with Yvanna and Astou (and our driver, Pape Doudou). The region is south of Dakar by a few hours, just north of The Gambia. It’s known for its greenery, numerous bird species, and fishing villages.

We had a slow start on Saturday morning due to a rain squall (when it rains in Senegal, it RAINS), but the skies cleared up quickly, and I loved seeing the scenery change from a maze of buildings, cars, and people to baobabs, cattle, and horse carts. When we got out of the car for the first time, I noticed that although it was much hotter, the air was also much cleaner, and it was a wonderful reprieve. I realized that I’d grown accustomed to the dense, dusty, and exhaust-filled air of the city.

Around midday, we arrived at our first stop in Joal – home to the family house of Léopold Sédar Senghor, writer, politician, and Senegal’s first president. We toured the house, then visited the Ile aux coquillages in neighboring Fadiouth, which is a man-made island built from shells. Every step crunches under your feet! We walked around the entire island, and went to the cemetery which is on a neighboring island. 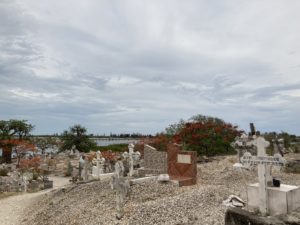 A beautiful view from the top of the cemetery

Although Senegal is a predominantly Muslim country, l’Ile aux coquillages has a majority Christian population. The cemetery, however, inters Muslims and Christians side by side. This is relatively common in Senegal, and is representative of the positive relationship that exists between religions here, which I think is an example all countries should follow. I’ve heard many people during my time in Dakar emphasize this relationship, and I’m starting to notice it more and more myself. For example, when there is a religious party, everyone is invited, everyone celebrates together, regardless of religion. One person even told me that they’ve seen Muslims praying in a Christian church. There’s a level of respect, understanding, and harmony that just doesn’t exist on the same scale in the US.

Back to Sine Saloum – the hotel we stayed at was the Ecolodge of Simal, and it takes quite an effort to get there. At some point on the way there, the paved road becomes dirt, then sandy dirt, and then there’s no road at all, just tire tracks crisscrossing on a wide sandy flat. There’s also a land bridge to cross, and if you have a picture of a land bridge in your head, it’s not this – what we drove across was a strip of sand exactly the width of the car, and perhaps one inch above the water level. But that’s how people get around, and it seems to work (we made it across without any problems), so there you have it! 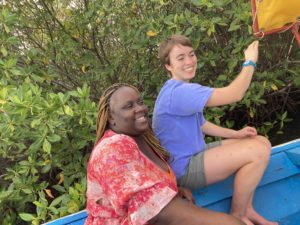 In Simal, we filled the weekend with both fun and relaxing activities. We toured the mangroves in a pirogue, toured the village in a horse drawn cart, went kayaking, had massages, visited the marché des femmes (an artisan market), and ate lots of good food. It was a wonderful experience, but by the end I was ready to come home to Dakar – mostly because no matter how many showers I took while I was there, I seemed to always be covered in sand…