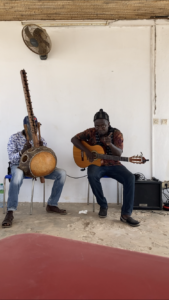 This week I was immersed in the very lively music scene of Dakar. Mostly it was fantastic, but I learned one very important lesson: time is a suggestion, not a rule. For example, last weekend when Yvanna and I went to see Wally Seck, we arrived shortly after 7pm for the 8pm concert. We stood in line outside the venue until about 10:30pm, when we were finally let in. The music started about an hour later, but it wasn’t actually Wally – it was a series of opening acts that went on until after midnight, at which point I was so tired, hungry, and feeling inundated with lights and noise that we decided to leave before Wally even arrived (we later learned that he entered the stage at about 2am). So we didn’t get to see Wally Seck, one of the most popular Senegalese artists, but it was a good experience nonetheless and we certainly learned our lesson!

My next encounters with music were much gentler. During the week, I had a class on Senegalese music, where I learned about some of the main traditional instruments (djembe, sabar, kora, riti, xalam, balafon, to name a few) and the people they are connected to, as well as the well-known artists of today. This was followed by a class on oral literature, taught by Dr. Massamba Gueye at the Maison de l’Oralité et du Patrimoine, where we talked about the traditions of storytelling – the different types of stories, who has the right to tell them, who has the right to listen, the different purposes these stories serve, and the ways in which storytelling and music are closely intertwined. I don’t think I’ve ever used the word “beautiful” to describe a class before, but it really was that. Even when he’s not telling an actual story, Professor Gueye teaches as if he is. The entire class was also accompanied by live music – a kora and guitar combo that was really lovely. 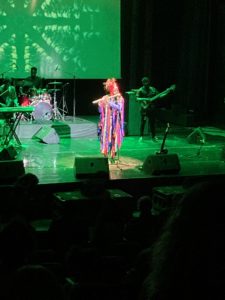 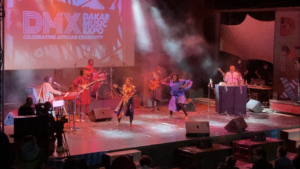 These dancers made me want to dance too!

Later in the week, I attended the Dakar Music Expo, an annual event in its early years at the Institut Français. I saw Will’s Afro Choir, Orchestre Jigeen Yi (featuring Amira Abed, Korka and special guest Soda Mama Fall), Alibeta, and Orchestra Baobab. Though all of the performances started at least an hour late, I had at that point learned to eat ahead of time and appreciate the “it starts when it starts” mindset, so I fully enjoyed the music. Each artist had their own unique style, but they all had one thing in common – they made me want to dance! And that’s saying something for me, a person who generally doesn’t do more than tap my toe and bob my head.

As I’m nearing the end of my third week in Dakar, my vocabulary in Wolof is rapidly expanding. So I can now say with confidence, ba bénène yone in sha Allah! (See you next time!).