This week passed without any major excitement – but I realize that if this was my first week, I would be saying it was full of excitement! I had a literature class, another session of dance and djembe (the best one yet!), a museum visit, and I made good progress on my projects at my internship. 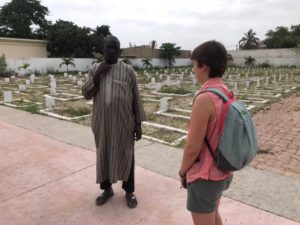 The highlight of the week was our Sunday field trip, which was both fun and educational. I learned something from each place we visited! We left Dakar in the morning (an hour later than planned, following Senegalese time), and our first stop was the Cimitière de Thiaroye. I’ve been taught about WWII several times in school, and I’ve read a lot of books on the subject, but only very rarely has the role of Africans been discussed. And I’d never heard of the Massacre of Thiaroye, which is a terrible and sad story. During WWII, France recruited men from their West African colonies as “tirailleurs,” or infantrymen, who fought on the front lines in Europe, and without whom victory against the Germans may not have been possible. At the end of the war, those who survived returned to the African continent via Dakar. At the military outpost in Thiaroye, the tirailleurs waited for the wages they had been promised several times over the last few years but never been given. The details of what exactly transpired are unclear, but the story we heard at the cemetery was that after much negotiation, the tirailleurs were finally told their requested compensation would be granted. In celebration, they held a party that night, but in the morning, instead of receiving their long-awaited payment, the tirailleurs were met by a surprise attack from French soldiers. The numbers are murky, but it is estimated that more than 200 men were killed that day. After surviving years of fighting in Europe, they were killed by the very people who had drafted them. Seeing the graves was a powerful experience, and it made me think about (as I have before) the selectiveness of the history that we choose to teach.

Our next stop was the Monastère de Keur Moussa, which was founded in 1963 by a group of monks from Solesmes. Unfortunately, because it was Sunday, we didn’t get to see much of the monastery, but thanks to my work at GAIA (for their environmental camp WeekEco, they took a group of kids to the monastery one year), I already knew a lot about it! The monastery was founded with the motto “le desert fleurira” which means “the desert will bloom,” and over the years, it has done just that. The monks practice agroecology, a sustainable approach to agriculture which is completely organic and based on the natural properties of plants and the complimentary relationship between agriculture and livestock. The results are amazing, and can be found in the boutique on site, from which I bought a delicious mixture of dried fruit! 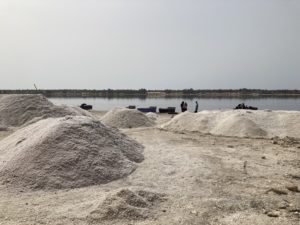 The final stop of the day was Lac Rose, which is named for its brilliant pink color which comes from the abundant algae. Unfortunately, it was an overcast day, which means that the color was not very vibrant…or really visible at all. But! It’s a lovely lake nonetheless, and has one other unique characteristic – an unusually high salt content, due to the evaporation of sea water from the nearby ocean. The salinity means that there are no fish, but that’s not a problem for the locals. Instead of harvesting fish, they harvest salt! 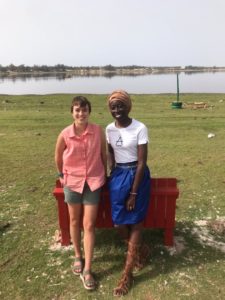 On the shore of Lac Rose

The men go out to the middle of the lake in a pirogue, and once they’ve filled their boat, they return to the shore where the women unload the salt tub by tub. It’s an ideal natural resource, because it constantly replenishes itself, although the salt harvesters do have to work in sections of the lake, in order to give the salt time to reproduce. Next to the lake, mounds of salt cover the shoreline, like sparkling white sand dunes, and it’s a beautiful sight. Before being consumed, it’s dried in the sun  , and then treated with iodine. I came home happy with two sachets of lake salt – one for my host family and one for my family in the US (spoilers, Mom and Dad).