Last Week in Paris — And the Rain Came Down

The weather for the last week has been dismal to say the least. The early morning rain makes it difficult to get out of bed, the soft pitter patter never failing to lull me back to sleep past the time I’d set on my alarm clock. Though it’s put a bit of a damper on our last week here (makes it hard to sit by Sartre’s grave at Montparnasse Cemetery, for example, which I had planned), I like to think it’s the city’s way of saying goodbye.

What is there to say about this last week in Paris? Exams and papers hit as they never fail to do. Just because I’m sitting in a cafe in Paris studying the ins and outs of French governmental systems in the 5th Republic, doesn’t mean that I’m not still studying. Hey, there are worse places to be.

I made a few last memorable meals with my host mom. Tuesday featured a succulent lunch of lamb chops with wild mushrooms and onions (eaten at the very last minute because I forgot to put the lamb in the oven while she was at a meeting but thankfully I live about 30 seconds from the APA office). Thursday night featured a post-exam meal of an omelette with chanterelle mushrooms. Saturday night we made a tarte aux pommes together for her to take to a friend’s birthday party. I went back to my favorite jazz club and had an impromptu photoshoot in some excellent violet light. 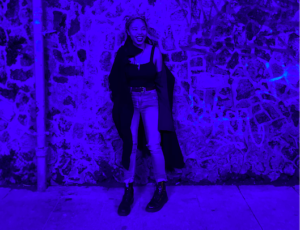 I think perhaps my most Parisian day was this past Sunday. I went to meet an APA Paris Semester friend for lunch at her foyer (dorm). I listened to the new Christine and the Queens album on the walk from the Saint Michel metro stop to the Ile-Saint-Louis, a literal island in the middle of the Seine that I hadn’t set foot on before. We walked 20 minutes through the pouring rain to go to the Marché Bastille, filling the now-soaked bags with ingredients for Salade Niçoise (plus a delicious olive basil tapenade to start). Stopped at a patisserie on the walk back for dessert. It was nearly 3:00 by the time we actually ate; it was my first-ever Salade Niçoise, and I think we did a pretty good job. We lingered over the table and talked into the late afternoon. 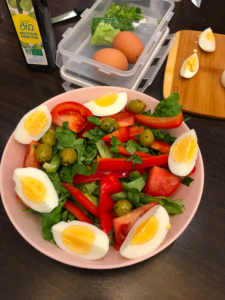 I left in the early evening. The rain finally stopped, and a small band of soft yellow light rose over the Seine. Amidst the chaos of finals, of packing, of prepping to go to a whole other continent for the next 5 weeks, all was right with the world. Better than right. 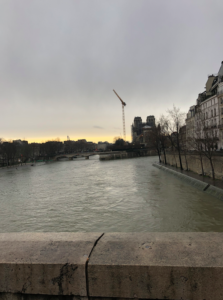