There is no way you can discover Le Comptoir Général just by walking along canal Saint-Martin unless you see other people sneaking in or were given explicit directions. My UChicago friends studying in Barcelona and I were brought here by a French friend who wanted to show us a “really cool place”. The speakeasy is so well hidden that even though Paul has been before, he walked passed it at first, doubling back to push open a gate off the main road. You have to walk through a narrow alley before you see the pink arrow over the otherwise unremarkable door.

This place has so many influences ranging from kitschy to tropical to hipster. There is a distinct African and Caribbean vibe because the space used to be a colonial museum. Now, in an ironic cynical twist, the waiters are all black. The prices are not too bad and the drinks are strong. We ordered two pitchers of rum punch and were good to go by dinner. There was a hip older couple and even a few children running around, but for the most part, the clientele are bobos (bourgeois bohemians) in their 20s and 30s. The music is also all over the place – ranging from mainstream, French chansons and West African riddims. 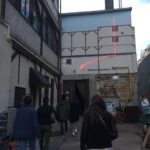 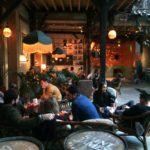 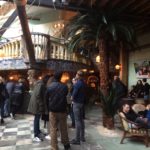