If you want to see French people lose their minds and learn some colorful language, go to a soccer game at the Stade de France. We got French flags on our cheeks and I patriotically painted the Russian flag on my forehead. The security was top notch due to the November attacks and the game started off with a moment of silence for Belgium. A cacophony of “putain”, allez les bleus and the marseillaise propelled the players to a French victory of 4-2 against Russia. 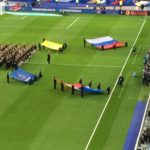