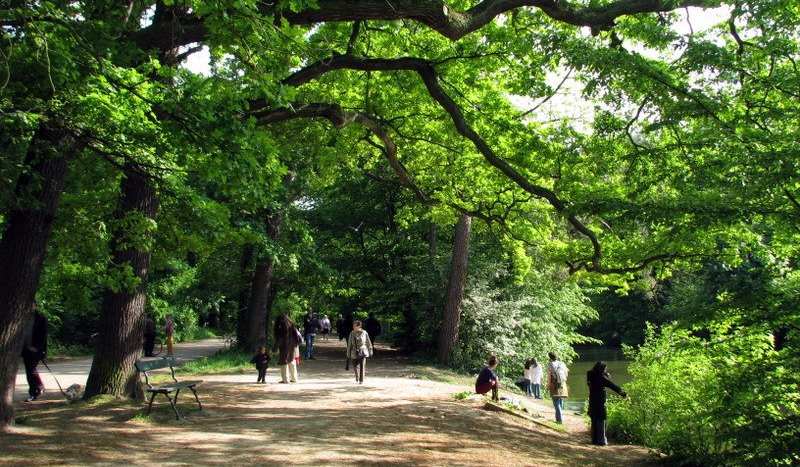 Whether I’m at home in the 19eme, going from one place to the next, or enjoying a cup (France don’t kid yourself, its a flask) of coffee, I am never alone. This has been one of the main differences that I’ve had to adjust to, living in Paris. Compared to my life in rural Southern Rhode Island or to that of my small liberal arts campus, I have to actively seek out places without people. The one place I’ve found is called the Bois de Vincennes which is a smallish forest/ arboretum in the southeastern periphery of the city, known for its hundreds of dirt trails through beautiful young stands of trees. But, as I discover on one of my many runs through the woods, it turns out this place is also known for being home to a nudist colony. I’m not sure if the nudists also live in the interspersed tents set up in the western half of the forest or if this is a different sort of colony altogether. Needless to say, my efforts to escape the anonymous gazes of my fellow city-dwellers has often been interrupted by the suprise encounter with said nudists…I can’t say we’re friends yet, but I still have a few months left.

But it has certainly made meeting people and making friends a challenge. One of my goals for this year in Paris was to find a group of french friends. For the first two months, I went to everything I was invited to. Whether it was going out dancing with our APA tandems or getting drinks with a few classmates, attending university parties halfway across the city, seeking out social groups for music and for running, and even attending slam poetry nights at this bar near my house.

But at the end of each night and upon exchanging numbers, I would look forward to an invite to spend time with the people I’d met a second or third time, and nothing would happen. Granted, since my phone got stolen this week and, of course I didn’t write down any numbers…not even my own…I now don’t even get to whistfully check my messages for a returned text. Maybe thats a good thing?

It may sound sad…but I honestly think it has somthing to do with this city dynamic. Perisians our age have most likely been living in Paris their whole lives. This is partly because universities prefer taking local students and because of the lack of student campus housing, it it cheaper and easier for students to live at home while going to school. This means that the friend they introduce you to at the bar has been in their life since they were kids. And the classmates around you who are sitting all alone, its not because they are subtily trying to invite people to approach them, its because they have this sence of security that comes with knowing they have their group of friends and the kindergarten class pictures to prove it.

The second barrier between you and a potential friend is this wierd (Parisian?) city thing where you don’t ever smile or make eye contact with people, and you definitely don’t do both at the same time. This social rule basically removes any possibility of connecting with that person sitting across from you on the metro or sharing the same park bench as you.

So, what do we poor, lonely Americans do? Well, what I’m about to offer may certainly not work for everyone…and to be honest, it hasn’t quite worked for me…but it has been the number one successful way for me to connect with strangers and at least get to the « name and number» stage. Anything beyond that may take a phsychologist’s profession diagnostic…

Two suggestions. One, don’t always be in a hurry to get to your destination, or better yet, don’t always have an end goal in mind. We can all sense when someone has somewhere to be or isn’t open to an exchange. If you let go of this expectation for what you are going to experience, you will be more open to improvisation and people can pick up on that. I have had more encounters with strangers than I have had at any bar, club, or party combined. For example, on my way home from classes, if the weather is nice, I’ll get off a few metro stops before my own and walk up Belleville or rue des Pyrénées. One day I was stopped by a beautiful coat in the window of an unremarkable shop facade. I walked in an was wondering through when I found the owner, an older man seated at a desk covered in sketches. I complemented him on all the many colors this one coat turned out to come in and joked about how impossible it was going to be to choose. After trying almost every single one on and taking into account his fashion advise, we got talking. The stories doesn’t really go on beyond there except that I hadn’t had a really conversation witha stranger in a while, and it felt good.

The second suggestion is: f*ck the social rules (sometimes). If you want to smile, just do it. If you want to look around you and happen to make eye contact and happen to smile, its so fine. In fact, if you want to approach people, be emboldended by the fact that most of us wouldn’t turn eachother down for doing it, in fact we all would tend to be receptive. I was having lunch at a park one day and found this group of ping pong players. As a complete stranger, I hesitated in my desire to join them. But I found the courage and came up to them, smiles and all. I ended up spending hours rotating games with them and even though I haven’t seen them since, I had a great time.

Ok yea, so I still have no close friends here and haven’t uncovered the magical formula for finding them, but just because you don’t have that group of friends, doesn’t mean you can’t find enjoyment in spending time with strangers. I think its really important to connect with people. Not just to practice french or in hopes of making a friend or learn something new, but because we are social creatures. We need to interact at some level to remain mentally and emotionally healthy. When you’re all alone in a country that doesn’t speak your langage, this isolation can feel hightened ten fold and if you don’t do anything about it, say hello to social anxiety and depression…speaking from experience, friends.

Of course, anxiety and depression are things we all deal with at some level, and whether you already take medication for it or you are experiencing culture shock for the first time, it isn’t always unmanageable or a sign of personal failure. But it can definitely get in the way of having healthy and positive experiences. I could write a book about dealing with anxiety and depression in a foreign country…but without any medical training to back me up, I’ll leave it off at the suggestion that breaking down those walls of isolation in little ways such as eye contact and smiles, saying hello to shopkeepers, asking waiters how their days are going, and being open to other people doing the same to you, will help you feel more connected, more engaged, and more positive.