Running off to Barcelona the weekend before exams perhaps isn’t the wisest idea, but I honestly regret nothing. I even watched “Vicky Christina Barcelona” the night before leaving to excite myself for the trip. Leaving Friday after impulsively buying a cheap round trip ticket, I take the shuttle from the airport and arrive in the city center, when I stumble into a free walking tour of the city. While I’m normally not the tour-taking type, it seems like it’s somewhat meant to be, plus I know very little about the city or its geography. Not only did I get familiar with the city, see far more than I ever would have by myself, but after meeting fellow solo travelers, I end up taking two more tours.

The free walking tour is a general tour of Barcelona’s gothic quarter and its history. The second, however, is a Gaudi and Modernism tour. Ruby, our tour guide, is well-versed in the city’s incredible architecture and Gaudi’s history as an architect. He not only left his mark on the city, but shaped it. We walk to see Barcelona’s incredible Music Hall, beautiful buildings that were built as homes for the bourgeois (one of whom owned a chocolaterie), and of course, the enormous unfinished masterpiece that is the Sagrada Familia basilica. Our tour guide is incredibly enthusiastic about architecture and points out the tiny details in Gaudi and other architects’ work, such as the small statues representing a favorite hobby of a building’s previous owner, or the religious symbolism Gaudi used without fail on all his buildings. We are able to enter one of the buildings as it has been turned into a café and is open to the public.

As our tour guide points out the meticulous details of the buildings, inside and out, I began to look for the little things: the bulbous light fixtures hanging from the ceiling, the carvings in the wooden beams, the stained glass shutters. The city breathed art, it procured it, it mastered it. It’s as if the entire city was a canvas for the modernists of the past. They painted every inch, every corner, no tiny surface left white or bare. It’s beautiful. Speaking of food, we finish the day with a tapas tour in which we go to some local hot spots for drinking and dining. Barcelona has some of the best food I’ve ever eaten in my life. They seem to eat incredibly enormous amounts—my new friend and I had to share 10 tapas for two, so essentially 20 servings of tapas in one meal. The next day we came across a deal of 5 tapas, one large pan of paella and a dessert, all for 15 euros! Also, if you ever find yourself there, please buy the street empanadas at a market. They go on the “top 5 best things I’ve ever eaten in my life” list.

Between Spanish guitarists in the metro and catching the sunset on the beach, Barcelona is one of the most enchanting places I’ve ever been. But I have to say my favorite part is getting up at 7 a.m. on Saturday to see the sun rise over Park Guëll, Gaudi’s former home and architectural playground. At sunrise, there are hardly any people there. The sun kisses the tops of the buildings, shining through the towers of the Sagrada Família and spreads its warm pink light over the tiles of Park Guëll, making their colors glow. 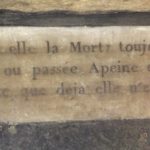 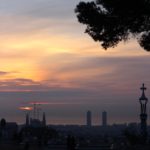 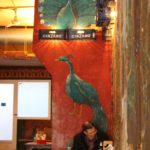 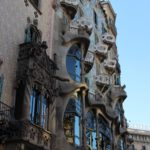 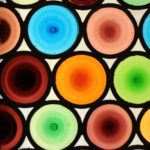 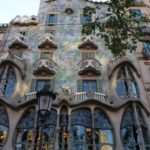