A digression into ducks

The weekend after London I did very little except study, prepare for exams and attempt to write 10 page essays in French, but I did get out a little to explore more of Paris. Here are some pictures from the Canal Saint Martin, the 4.5 km long canal that starts near Place de Stalingrad and ends at the Seine. The canal has a series of unusual hydraulic lift bridges that have made the canal iconic. It was also a filming location for the French film Amélie. If you go there, be sure to explore the side streets in the 10th arrondissement. You’ll see some amazing street art, countless little coffee shops, juice bars, hidden cafés and sandwich shops. There are also some to-die-for turkish sandwich shops near there so be sure to grab some food, head over to the Saint Martin and picnic by the canal. 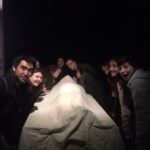