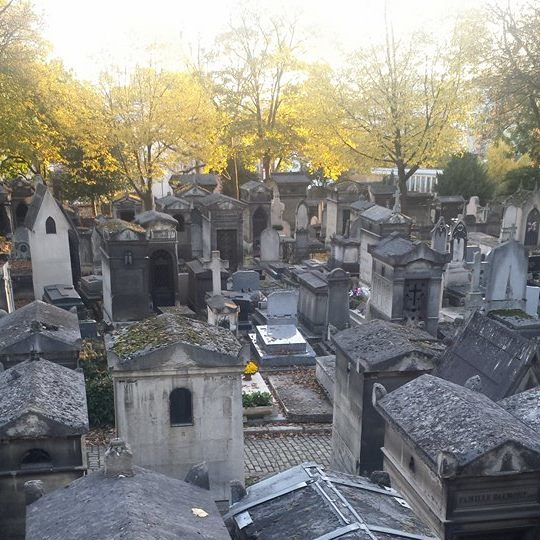 Conference on Writing Wolof at UCAD

A French language writer, since 2003 Boris Diop has also been writing in Wolof, claiming the right and the duty to write in the first language of Senegal, which was the subject of this conference. We would love to read this last book by Boris Diop, but we will have to wait for his translation into French or English or to make greater progress in Wolof!

For our first show of the program, we chose to attend a coffee-concert. Few people in attendance during this period of Ramadan, but a very festive atmosphere! Dr. Daniel Bitty, ISM International Relations Director and teacher of the Economics and Development course and just off the plane, Carina Yervasi, teacher of the African Cinema portion of the Contemporary African Arts course, were among us. On the menu: Afro-jazz and pop ambiance with a hint of traditional. The singer and her five musicians have enchanted us! We were even able to enjoy the guest star of the evening: Kemit, the Slammer and Gabonese author, who we will see again on stage at the French Institute to celebrate the Festival of Music on June 21st! A screening and debate at the West African Research Center (WARC) on Senegalese filmmaker Sembène Ousmane’s 1975 film, Xala, launched the second two weeks of APA’s inaugural Dakar Summer Program and the African Cinema portion of the Contemporary African Arts course. Known for its sarcastic wit and commentary of corruption in the decade after independence, Xala reflects on the problems of the new postcolonial elite in Senegal and the economy by depicting lead character El Hadj’s impotence at the onset of his third marriage. In Xala, we find many of Ousmane’s thematic preoccupations – gender relations, generation gap, and religion. Xala is essential viewing for understanding how manipulations of both religion and financial policies hindered national development on many fronts.

Carina is a professor at Swarthmore College where she teaches French and Francophone studies. A major specialist of African cinema, she accepted APA’s invitation to come and share her research and teach this segment of the Contemporary African Arts course to our 2018 cohort. 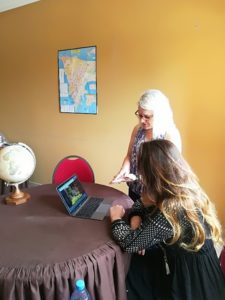 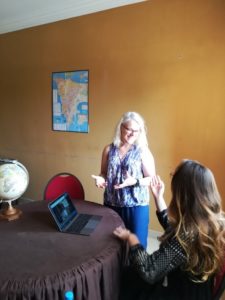 APA: “Carina, what is the reason behind watching and studying African cinema?”

Carina: “It’s important to watch and study African cinemas for many reasons: It offers an historical overview on the development of a national cinema in each country. It permits a better understanding of cultural and social aspects represented on the big screen. It shows how hard it is to make a mark in a globalized film industry, especially with the internet. It creates an opening to see other visions of the world as counterweight to the influence of American cinema.”

Carina: I think that depends on who is being asked the question. I can respond to the case of films from the so-called Francophone countries… It will remain difficult to get local financing for full-length feature films.  It’s clear. Due to the lack of national film industries in many countries, filmmakers remain independent and turn to international co-productions often with private cable TV stations; with organizations (like the Organisation international de la Francophonie – OIF) who want to promote the French language or other structures, with North-South financing, which allow filmmakers to make films, though perhaps shorter or only documentaries or reports for webTV – new media outlets on the internet. A big supporter of Sub-Saharan cinema comes from Morocco, a country which finances projects and some of the biggest African film festivals in the world. I think it’s important to note that digital technologies have brought costs down, but filmmaking is still a very expensive enterprise.”

APA: “What are 3 movies you can recommend for discovering the Senegalese culture?”

Our program started in the middle of Ramadan. Dakar, being 90% Muslim, lives for 29 days at the rhythm of the fasting. Working hours have been modified to allow everyone to get home early in order to prepare the Ndogou (breaking of the fast: Coffee or tea, a date and then bread, cheese, sliced beef, then an hour or two later: dinner.) The Ndogou is traditionally shared on the ground on a mat with family and friends, this is the real moment of sharing. During these days of Ramadan, the city lives in slow motion. Korité: Festive meal with our director, Sophie’s, family, Kinka And Pape Ndoye, who have so kindly received us!

On Thursday, June 14th the city was buzzing: we ran every which way to finish the preparations for the feast. Most important was the trip to the tailor to purchase a new party outfit as everyone was wondering if the sages were going to announce their observation of the moon, confirming the end of Ramadan and validating the date of Korité. At 10:30 pm on Thursday, the news arrives, Ramadan ends on Friday, June 15 and all of Senegal is celebrating Korité with their family! On this special day, each of us has celebrated Korité with family or with friends. It’s impossible to be alone on this day of feast!