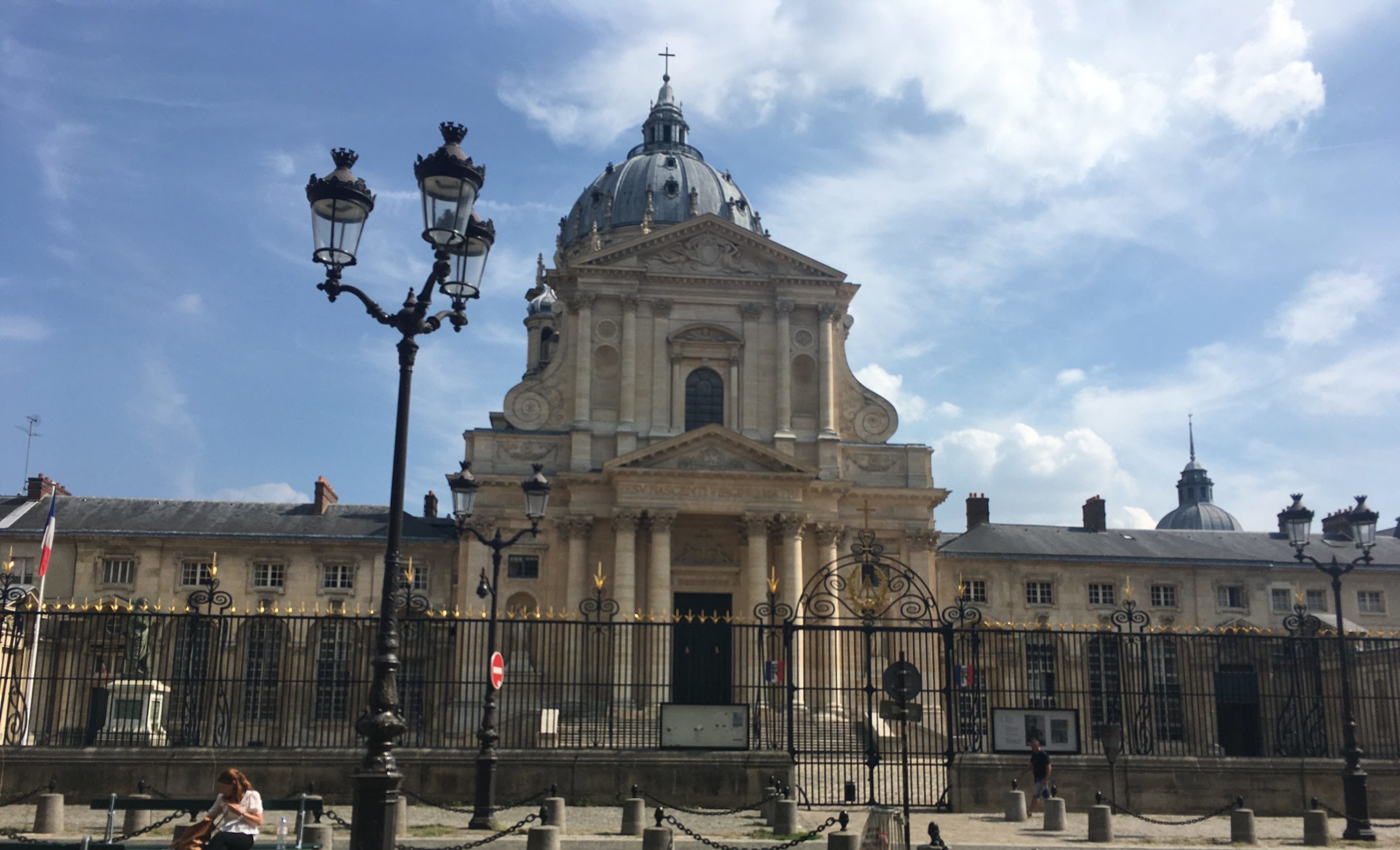 Back to the Beginning in Paris!

Hello and welcome to the 2022 adventures of APA Multi-Country! Over the next few weeks I’ll be catching you up about our semester so far and giving you updates on what’s left of this incredibly unique study abroad experience. First, a little about me: My name is Maddy and I’m a senior at Barnard College double majoring in Urban Studies and French and Francophone Studies. At Barnard I play the cello in an orchestra and I’m an active member of Jewish student life. I also love listening to music, cooking, and eating, and I’m a huge history nerd! 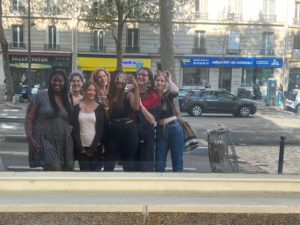 The 2022 APA FMS group! I’m in the back left with the purple hair and glasses.

The students of APA Multi-Country 2022 are a fabulous, tight-knit group of seven who I have the honor of studying, exploring, and practicing French slang with. Today I’ll be telling you about our first few days in Paris, our first stop of the semester all the way back in late August. I had to figure out some of the difficult and annoying, but necessary, parts of international travel, but thankfully the APA staff was right there to help.

My first day in Paris is hazy from lack of sleep and jet lag- I am unfortunately no expert at sleeping on planes. Each of us got off our separate flights into Charles de Gaulle Airport and walked straight into a nightmarishly long border security line! I spent the hour in line trying to understand some of the conversations going on around me in French, with a small amount of success. But not to worry- the full-on immersion would soon boost my eavesdropping skills enormously.

At our designated meeting spot in the airport, our group exchanged our first, very tired in-person greetings with each other and with Claire, the iconic founder and director of APA. Claire rescued us from CDG in a minibus and brought us to our hotel in the 14th arrondissement (for those who don’t know, an arrondissement is a division of Paris), where we would spend our first few days. All of us were starving and we were so grateful when the APA Paris staff met us with baguette sandwiches. I would eat one of those sandwiches at least twice a week in Paris, but that first baguette was absolutely god-tier.

For the rest of that first day, we went through some important must-do things like buying a SIM card. You’ll hear it again and again if you’re going abroad, but don’t leave the country without unlocking your phone! We were also shown the nearest metro stop and got an unlimited metro card- my best friend for the month of September. After a night of much-needed sleep at the hotel, I woke up for my first French breakfast at our hotel- tons of fresh bread, cheese, fruit, and Nutella.

Then, I had my first international almost-disaster. The day before, in my jet-lagged haze, I had put my tiny, tiny SIM card in the zipped pocket of the new, RFID-blocking wallet I had bought for traveling. When I opened up the pocket in my wallet that morning I realized with horror that I couldn’t find my old SIM card- which would mean that when I returned to the US I wouldn’t be able to access my cellular network. Cursing myself, I opened up and emptied every single pocket of my purse and clothing from the day before, with no luck. Then, convinced that I had already hopelessly screwed up my trip, I miserably took the elevator down to the hotel lobby to find an APA staff member. There, on the lobby floor next to the elevator, was my SIM card. Heart soaring, I rescued it and taped it onto a piece of paper that I folded and kept safely in a pocket of my suitcase. 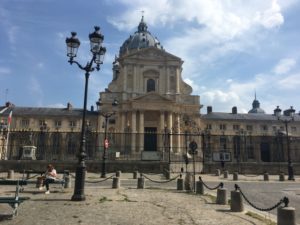 The Sorbonne in the Quartier Latin!

After some informational meetings about our program for the semester, our group had our first tour in the city, in the nearby Quartier Latin. There, we met our fantastic and very, very French guide, Benjamin (in French, bahn-ja-mahn)! Benjamin told us some historic secrets of the Pantheon building- for example, the building was once a church that was secularized after the French Revolution. How can you tell? By the subtle changes in the brick walls that highlight where the old stained glass windows were filled in! We also saw the famous Lycee Henry IV where Emmanuel Macron went to school. I was struck by the sight of Parisian teenagers casually lounging and drinking Coke on the steps of 16th century buildings. This history is simply a part of daily life!

That night, APA treated us to a classically French dinner at a brasserie. We were told to meet there at 6:30, and when we arrived the restaurant was just opening. We were the only people inside- I would soon learn that 6:30 is NOT dinnertime for the French. We ate a huge three-course meal, beginning with an aperitif (a pre-dinner drink) of kyrr, which is a popular cocktail with white wine and crème de cassis, a black currant liqueur. Next was the entrée- which is actually an appetizer and not a main dish, unlike in the U.S. For my plat, or main dish, I ordered fish, and it turned out to be an ENTIRE fish, steamed with seasonings. I was pretty daunted, but Astrid from the APA staff showed me how to eat it. Of course, there was tons of bread and wine with dinner as well. 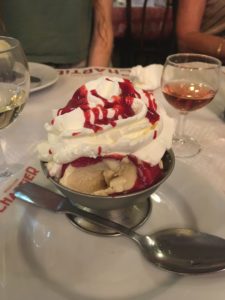 Little did we know that as we all chatted in French during the 3 hour meal (which is a pretty standard length for a meal in France), the APA staff had another mission as well- getting to know us better in person to confirm our host family matches! That’s the level of care and personalization that APA takes with students- they won’t just finalize a match on paper. At the same time, all of us were really nervous and excited to meet our families at the end of the next day since we knew absolutely nothing about them. I’ll talk more about my Paris host family experience “bientôt” !