For the first half of winter break some of the other students in the program (Greg, Yuki, Chris, Lexi) and I travelled all the way to Fez, MOROCCO! A RyanAir flight later and booking an AirBNB with just one bed we were on our way. Since there are just so many photos I thought it’d be easier to show you guys what our trip was like. Definitely would recommend going. Be ready to practice your French,  meet some friendly faces, and barter, barter, BARTER! 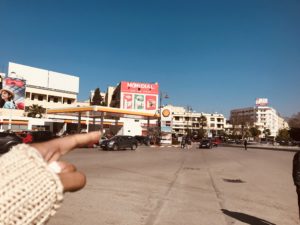 Post Airport Taxi : 2 AM Shell. The gas station our taxi driver, to our horror, stopped at NOT for gas, but to follow a separate strange black vehicle further into the night. We later found out it was our AirBNB host not a serial killer. Close one! 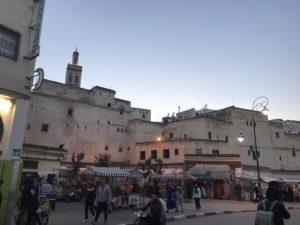 5pm – outside the Medina. Natalia and Camille lived in a separate AirBNB was near this plaza of sorts. We truly felt the pain of no cell service after 2 hours of aimlessly wandering we got the AirBNB host to come guide us through the several alleys and tunnels to their rabat. 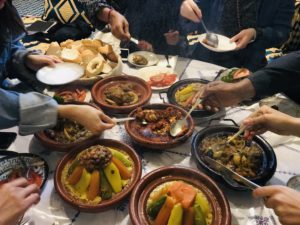 First Dinner. The AirBNB host and his lovely father made us a traditional Moroccan dinner, so yummy!! 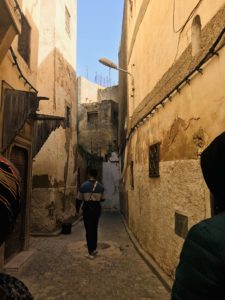 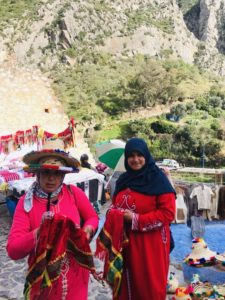 First Day: 11 am Royal Palace. Walking through the huge arches right outside of the palace as we begun our 45 minute trek into the city center from our AirBNB for breakfast. Hangry couldn’t begin to describe me at the moment, but the architecture was a good distraction. 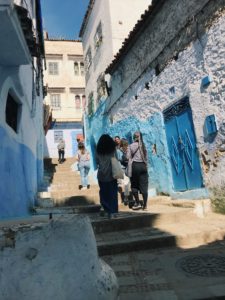 2nd Day: Chefchaoen. This city truly blue me away. Everything was blue. The walls. The ground. The cars. And me on Monday when I realized I can’t stay forever. Although we were only a couple hours North it was interesting to hear not only French and English being spoken, but Spanish too! While I can only say “ayyy mija” or “dios mio” out of exclamation, it was still cool to listen to Nathalia (whose fluent) speak (really argue) amongst the waiters when they tried to trick us into buying water or appetizers. Stay sharp kids! 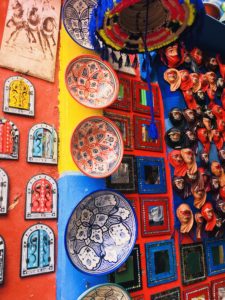 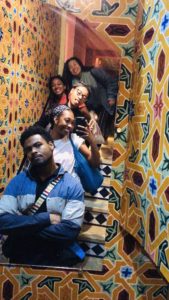 3rd Day: 1-3pm Hammam. Not having heat/ hot water made sure we got out the house in the morning, but also created a shortage of showers taken…… After 3 DAYS of living like a 6th grade boy, we were INCREDIBLY thankful for the Moroccan baths (and free massage) the ladies at the spa gave us! #born Greg decided to wait until the end when we returned to Paris the next day so by default wins the record for Dirtiest, but Happiest Camper. :’) 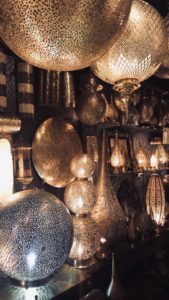 3rd Day 4pm Medina. With Fez being known for its craftsmanship its no surprise these were all handmade! My mom when she went to Marrakesh years before actually brought some to redecorate with. It was a nice taste of home. 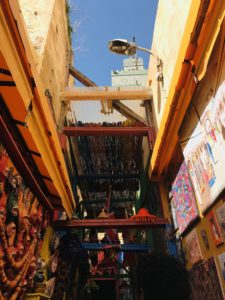 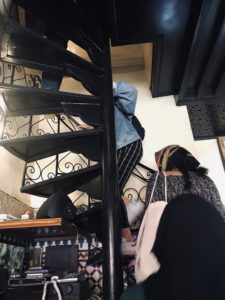 No Weights Just Cardio: All the good restaurants were perched on top of these beautifully tiled builidng that forced us to hurl our ginourmous bodies up these tiny spiral staircases. Sending prayers to the waiters who do that on the daily. 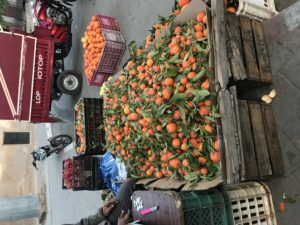 4th Day: ORANGES EVERYWHERE Instead of dessert, traditionally we were served either the SWEETEST most candied caramelized balls of death that just practically screamed cavaties OR  dozens of oranges and bananas at a time. While they serve delicious tea, drinking water with your meal is sadly just a lost concept the French forget too, so we greatly ate them as we were so thirsty after all that couscous. 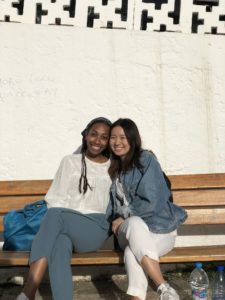 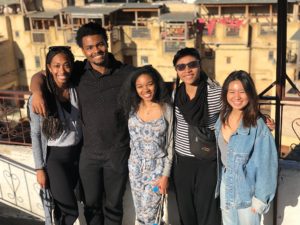 Fifth Day: La Tannerie. Behind us is the HUGE pools of dye and ammonia they use to make all the leather products they sell in the markets… so they say. Minutes later our lovely guide mayyyyy have scammed us into paying double, but hey I guess we paid for the experience too! 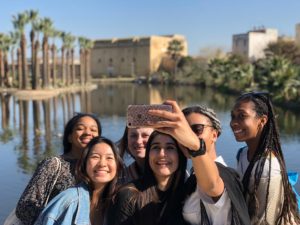 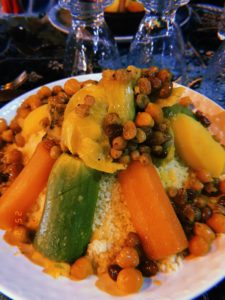 9pm Medina Restaurant. Theres something about an immense heap of couscous that makes me happy. I want to be a member of the Clean Plate Club so badly but my body just can’t keep up. One day… 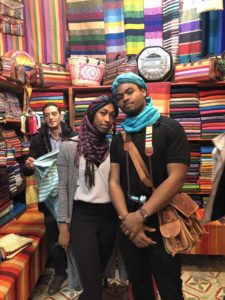 Fifth Day: Good Girl RiRi and Lil G. We look like we are about to drop the most fire Arabic mixtape of 2019. #staytuned 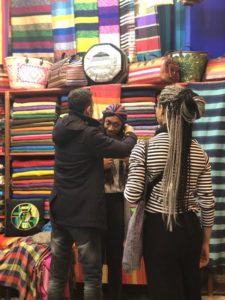 Backstage. My manager putting the finishing touches on my turban. 😉 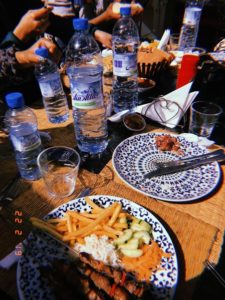 GOOD EATS. Protein. I’ve missed you… I didn’t miss baguettes not once. 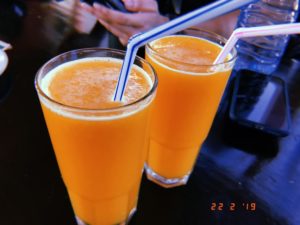 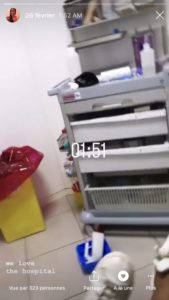 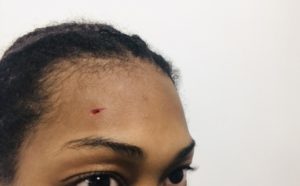 2 AM:  Snitches get stitches, annnnnd I guess me too. I had been trying to pack my bag and get everything organized for the airport the next day like a good traveller, but couldn’t quite find the top to the argan oil we had just bought in the medina earlier that day. I was determined to find it as the last thing I wanted was to come home with was not only smelly, but oily clothes stuffed into an oily back pack as we had an 8 HOUR bus ride to Amsterdam the next morning with that same same backpack. So I was searching high and low but on my way back up from the low I SLAMMED my head into this clean cut, very minimalist, but very hard wooden shelf in our AirBNB. I immideately tried to not freak out and be a “big girl” and not cry, since thats normally my first go to move. But as soon as I saw the blood pouring out in the mirror I lost it. Now I feel like anyone watching would have thought I was the star of a soap opera it was so dramatic to be crying in the mirror alone, but truly hurt like HE-double hockey sticks. After that scene was over, and 30 minutes of frantic texts to my pre-med friends and anxious mother decided the hospital was the move to prvent infection and a scar (#ew). I ended up getting a I think about one single stitch. But throughout the several shots of numbing syrum and stitches themselves, simultaneously cried whilst holding a full conversation in french with doctor. Astrid, our language teacher, I just know would be impressed, because I know I am. We ended up leaving around 3am delirious but only ended up paying around 1/4 of the price we would’ve at a hospital back home in Paris or US! Then to make things better the French doctor I saw to get the stitches out in Paris the following week said he did “un travail parfait”. So 10/10 would recommend a late night trip to my buddy. 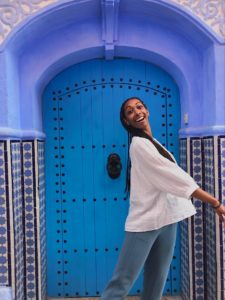 ENFIN. Thats a wrap! Can’t wait to twirl myself back over into the Moroccan sun. My farmers tan and $80 stitches were definitely worth it.