The French love a good protest. I’ve passed by numerous manifestations, people chanting, holding up signs, making impassioned speeches. On one hand, it is impressive how sure people are that there individual voices will make a difference to causes they care about, on the other, it seems that going to protests is just a national pastime.

Back at Nanterre after break, we were met with a rallying student body. I was quickly approached and handed a flyer for the current cause. As far as I understood, the French government is writing in a law that will change how many hours one can work a week. In France, you get paid for 35 hours. It is not like the States where you can work 50 or 60 hours. In addition, bosses will have an easier time if they want to fire somebody. There has always been a good deal of protectionism and emphasis on workers’ rights in France. The spirit of this protest is: the government is demanding more for less.

Before class we were again given the spiel. Later, during our exam someone knocked on the door, but my professor put her foot down. Instead of leaving us to do our text analysis, the protester let rain the flyers he was holding.

Greves were announced for the next day, meaning the unions were striking and the RER and metro would be shut down. This happens a lot. As it inconveniences all the commuters, it is an effective bargaining chip. Though this time the greve lasted only a day, my host mom recalled a time when it took two months for all actors involved to find a compromise. 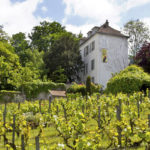